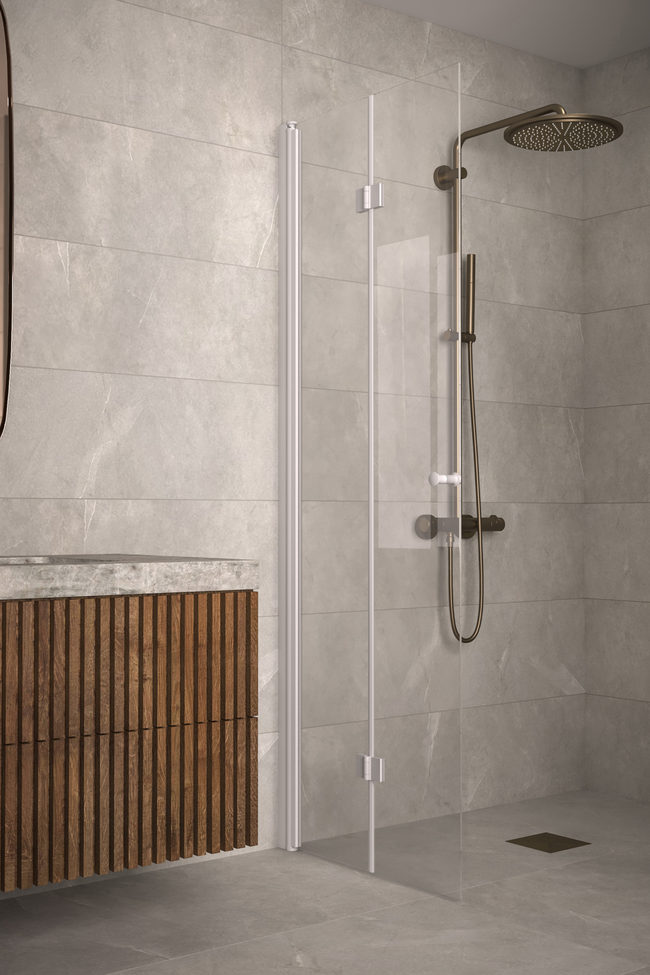 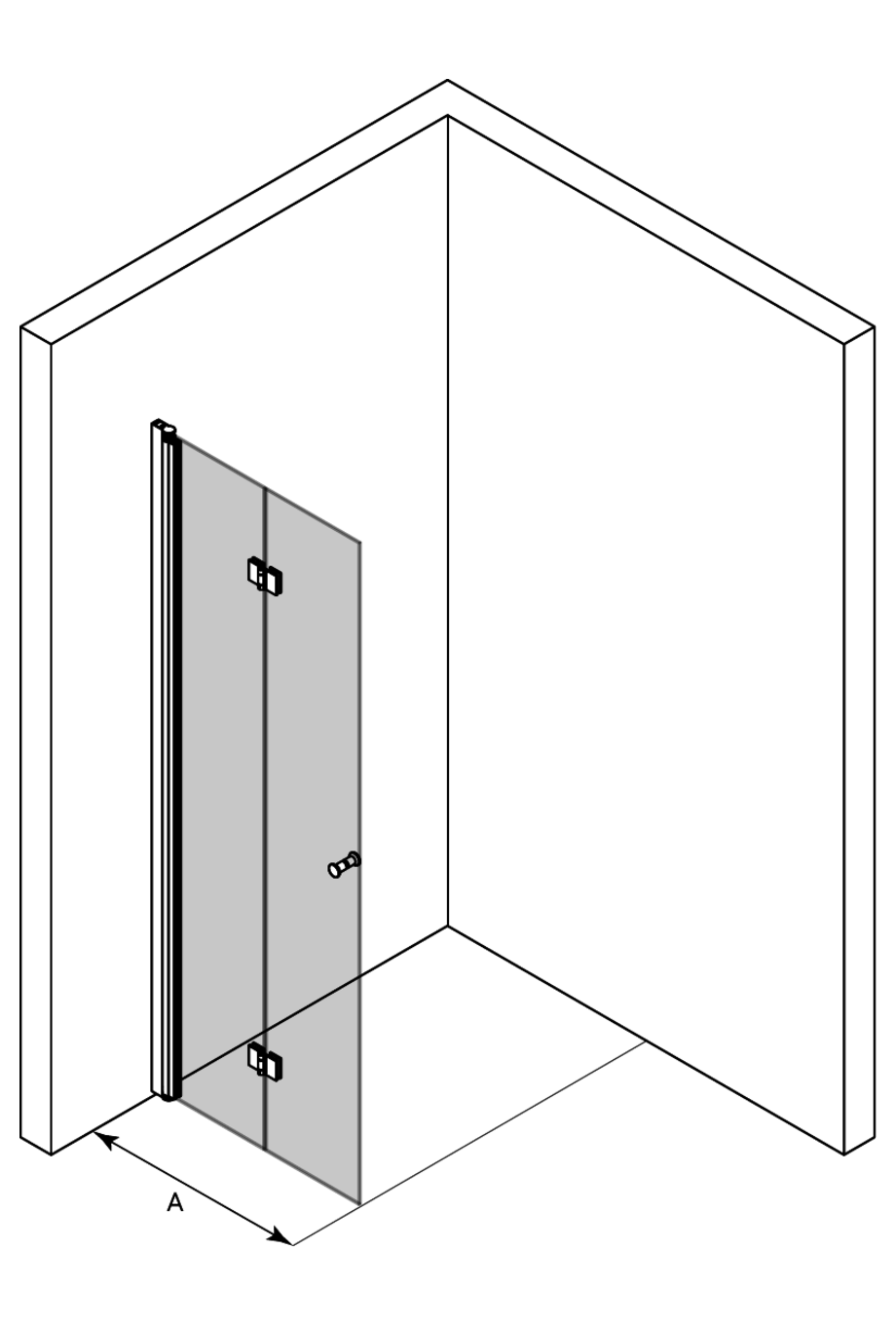 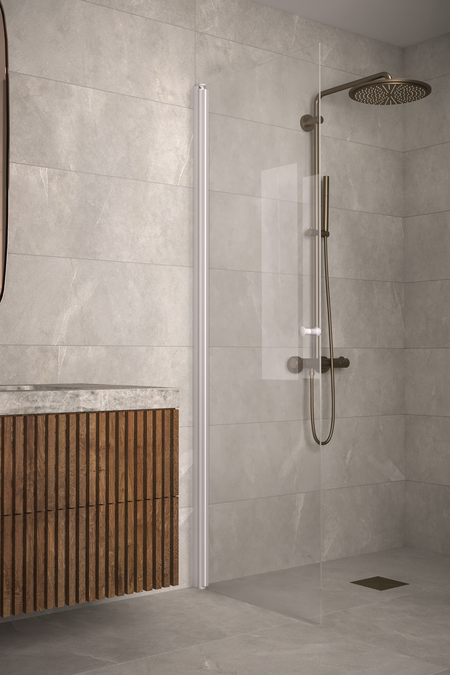 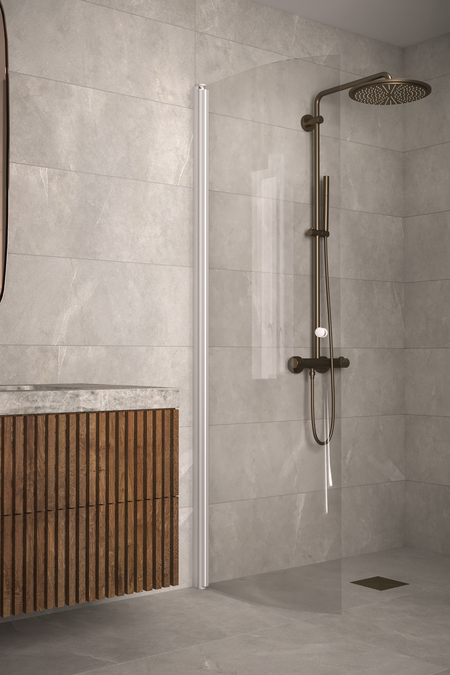 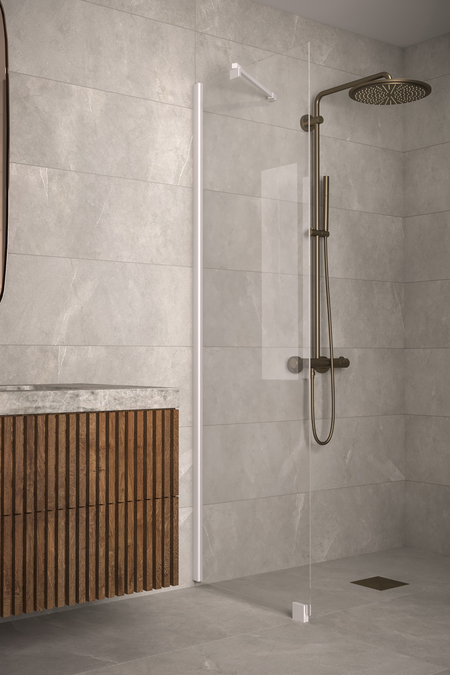 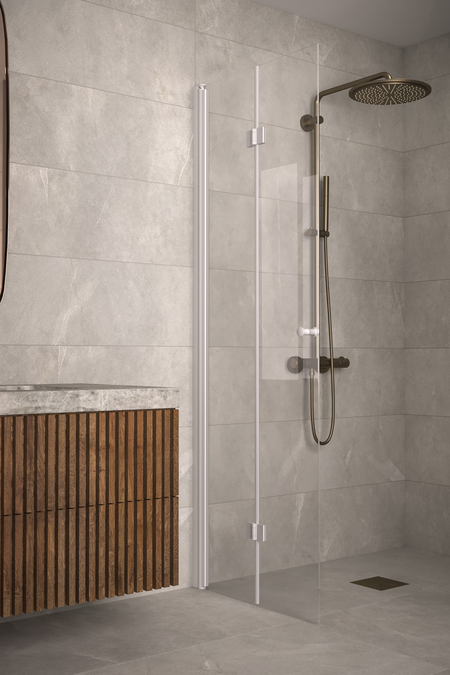 Folding shower screen protects the space and the fixtures next to the shower from splashing water. When the shower is not in use, the shower screen can be folded into a small space against the wall of the building, inside the showering area. The shower screen turns 90 degrees in both directions and is equipped with adjustable centring. The centring attempts to return the shower screen back to the open and closed positions. In addition, the outermost panel turns 180 degrees relative to the inner panel, so that panels fold against each other inside of the shower area. A profile handle along the height of the entire panel facilitates use, if necessary (optional equipment).

The shower screen is attached to the building wall with a wall mountedprofile. The installation height is freely selectable. By installing the product close to the floor and by mounting a floor seal to the bottom edge of the panel j the flow of water can be restricted. Installation guide

The profiles mounted to the edges of the panel are manufactured of aluminium. The white (RAL 9016) and black (RAL 9005) surface treatment options are manufactured by powder coating. The grey coating is manufactured by profiles that are sandblasted before anodization, so that the surface is as smooth as possible and there will be no fingerprints. The fittings used in the product, like square foot and brace bars, are chrome plated brass alloy.

The product is manufactured of 6mm thick tempered safety panel (EN 12150). The safety panel can be treated in the factory with Cranith calcification prevention coating. The coating enables the panel to stay clean easier. Clear and smoke are smooth surfaced and transparent panels

The size of the shower screen can be selected from the standard dimensions or it can be manufactured custom dimensions. wall mountedprofiles have 15mm of adjustment range. The adjustment range can be used for levelling any tilt of the building’s wall or for extension of the width of the shower screen in relation to the provided standard dimensions. The width can be further extended by 34 mm via the extension profile (optional accessory). The extension profile can be grooved, for example, for the inlet of the surface water pipes.

The total width of the selected product is:
- At its narrowest: 671mm
- At its widest: 686mm
Dimensions may deviate from the declared values if adjustment tolerance must be used to level the tilt of the building’s walls.:

The product is equipped with a round knob handle manufactured from chromed brass.

The total width of the selected product is:
- At its narrowest: 671mm
- At its widest: 686mm
Dimensions may deviate from the declared values if adjustment tolerance must be used to level the tilt of the building’s walls.: